Parental Age and the Rise of Autism Spectrum Disorder

I recently participated in a brief discussion on YouTube about Autism Spectrum Disorder (ASD). The question at hand was, to quote from the original commenter I was replying to, "why the increase?" I suggested that one of the primary causes of the increase in ASD was the change in it is defined. In the fourth edition of the Diagnostic and Statistical Manual of Mental Disorders (DSM-IV), the disorder was defined as "Autistic Disorder," and was not to be confused with other behavioural disorders such as Asperger or Rett Syndrome; however in the fifth edition (DSM-V), "Autistic Disorder" was changed to "Autism Spectrum Disorder," and several syndromes and other behavioural/personality disorders that were once distinct from each other are now categorized as different Pervasive Developmental Disorders (PDDs) under the autism spectrum. This change in definition could easily explain an increase in diagnoses of autism, because you're incorporating a large portion of the population under a new moniker (or rather, a new definition thereof).

The other explanation I gave, which is what resulted in the prompt for this post, was that physicians and psychologists are becoming more familiarized with how to diagnose ASD, and thus are starting to accurately identify individuals who do have the disorders; individuals who, before, would have been diagnosed as something else (possibly mental retardation), or simply told that there's nothing wrong with them. This happens quite often for people who have high-functioning autism (HFA), such as myself. So with a combination of these two factors -- broader definition and increase in training -- it's easy to suggest the cause of a large part in the increase in ASD. However, therein lies the issue: it's only a fraction. As one of the commenters pointed out, there is still a portion of the increase that has not been fully explained. So while we can provide somewhat of an answer for "why the increase," there is a degree of uncertainty.

The video this discussion took place on was one by C0nc0rdance, entitled "What Causes Autism?" After a few more exchanges, C0nc0rdance made a comment on the thread suggesting what he thinks to be a strong contributor to the increase in ASD, pertaining to the unexplained portion: parental age conferring higher risk for ASD, and an increase in parental age in the United States; using data from the CDC to support his case. I'll be honest, I shrilled a bit in excitement at a response from C0nc0rdance. I know, it sounds cheesy, and comments from the publisher of the video aren't exactly a rare occurrence, but his videos have done a lot for me over the years. The first time I watched one of his videos on YouTube was at the beginning of my sophomore year of high school in 2009. It was a time where I was conflicting with my upbringing as a Protestant, and trying to learn more about science, specifically evolution. His videos helped me come out of a pretty rough time in my life, and pushed me to my eventual position of agnostic atheism, as did many other YouTubers and popular scientists; and so I have to owe him my current state of being.

That being said, I don't agree with him in this case. I was originally going to post my own analysis of what I think the undocumented cause(s) of the increase in ASD diagnoses is/are, but now I have a prompt, and so I'll shift gears and simply address the more narrow topic. Here was C0nc0rdance's full comment, just to frame the question properly: 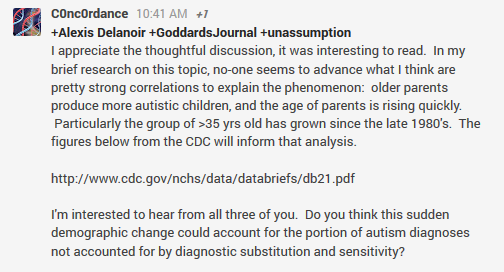 So now I shall contribute my answer to that question: does the increase in parental age in the United States account for the unexplained portion of ASD diagnoses? I'm unsure of whether C0nc0rdance was proposing this to be his defining proposal, or just an idea of many, but my short answer is no, I don't think it explains that unaccounted portion of increase in ASD. I think it is something that needs more research, but either there are a large number of other variables working here, or there are a smaller number of variables with much large effect sizes. Of course, I wouldn't be justified in taking this position without explaining my case, first.

I'll begin by explaining the association between parental age and ASD. A study published in the International Journal of Epidemiology in January by Idring et al. looked into the correlation between both maternal and paternal age of parents, and the risk for a child developing ASD. The study reviewed a sample of 417,303 Swedish children born from 1984 to 2003, where 4,746 of them were diagnosed with ASD. It was found that while maternal age has a non-linear association with ASD, conferring higher risk after about the age of 30, paternal age is linear, suggesting that a consistent variable related to the father's age is causing this association, while the mother's is more complex. Furthermore, as one of the study's authors suggested, this linear association between paternal age and ASD would support a genetic hypothesis, such as an increase in genomic alterations over the father's lifespan with age; further supported by the fact that the strongest association with paternal age occurs when the father is over the age of 40, but the mother is 25-35 or younger. But does a genetic explanation hold up? We'll get to that in a moment.


The non-linear association between maternal age and ASD, on the other hand, would lean more towards an environmental hypothesis; something changes in the mother's environment after the age of around 30 in order to confer a higher risk for the disorder. As the authors of the previous study note, maternal age has not been as extensively researched as paternal age. That being said, depending on the nature of the association, I can posit a few explanations for the increase in ASD conferred by maternal age, such as a higher rates of smoking or more frequent birth complications with increasing age, but let me get back to the genetic explanation for paternal age before I address that.

What is the chance that the association between paternal age and ASD is a result of the father's genes, or the interaction between the genes produced by a father of age 40+ and a mother of age ≤ 35? I'm going to say this is probably not the case. Remember that the increase in ASD is being observed in the United States. The CDC produced their own report on the prevalence of autism in March of this year, showing that while it's true that there has been a substantial increase in the diagnosis of ASD -- from 6.7 per 1,000 in 2002 to 14.71 per 1,000 in 2010 -- the rates vary from state to state. For example, while the highest rate was in New Jersey (lucky me) at 21.9 per 1,000, the rate in Colorado was between 9 and 10 per 1,000, and the rate in Alabama was 5.7 per 1,000. It'd be obscure to suggest that there is such high variance in reverse-cougars from state to state in order to support the genetic explanation, and that these rates have been increasing somewhere in the United States for the past few years. I'm not saying it's unlikely, I'm just suggesting by way of Occam's razor that this explanation should be put aside for less assuming explanations.


So what about an environmental explanation? Should mothers be careful of environmental influences that are increasing in the United States? Is there something in the water in New Jersey that's putting them at greater risk of ASD? If you've ever been to the Jersey shore, you might think so, but as the CDC declares as well, this probably isn't the case. It is much more likely to be a result of the aforementioned change in definition, an increased willingness to label certain behaviours under the disorder, better familiarization of doctors to diagnose the disorder, and to explain the state-to-state variance, differing access to medical care that would allow these diagnoses to be made.

So, it seems that a genetic explanation is unlikely, and the CDC tells us there's nothing to be too alarmed about concerning potential environmental risks. But what about the increase in parental age? Parental age confers a higher risk for ASD, and parental age has been increasing; however, it simply doesn't stand up to scrutiny. A study from February of 2010 by Shelton, Tancredi and Hertz-Picciotto found that while parental age is associated with this higher risk, it explains only about 4.6% of the increase in ASD diagnoses in California. Of course, this is only one state, but the researchers made no controls for their calculation, so things like socioeconomic status and availability of medical care could be skewing the results to be even higher than what they actually are. With the other information we have available, it seems that mothers shouldn't be too concerned about their age during pregnancy, or something else floating around in the air suddenly. To summarize:

- Paternal age has a linear association with an increase in ASD after the age of 40.
- Paternal age has the strongest association when the mother is 35 or younger.
- Maternal age has a non-linear association with an increase in ASD after the age of 30-35.
- There has been a great increase in the rate of ASD diagnoses in the United States, but this trend seems to be exclusive to the United States.
- Parental age has also been increasing in the United States.
- Rates of ASD greatly vary from state to state, suggesting something environmental as opposed to genetic.
- Only 4.6% of the increase in ASD in California can be explained by parental age; this could be direct, indirect, or statistical noise due to data limitations.
- The available data suggests that while parental age is a possible explanation, the much more likely explanation to replace it would be diagnostic factors and ones relating to medical access.

This topic has personal importance to me, for obvious reasons. I've been researching it since I was diagnosed with ASD, and so I like to participate in discussions relating to it, and I like to look into the cause of ASD. I've always been relatively unconcerned with the increase in diagnoses; but when one of my favourite YouTubers proposes an explanation for an unknown portion of the increase, I'm almost forced to examine it. This was fun for me to do, and so I thank C0nc0rdance and the other individuals involved in the exchange for bringing this topic up for discussion.