How to Remove a Hornets' Nest: The Tale of a Patriot

On August 7th, 2014, something happened that would change the lives of every citizen in my neighborhood forever.

Alright so a few days ago, I wake up and I go outside to get in my car because I was hungry and I like chicken. As I'm getting in my car, I hear an irritable buzzing above my head, so I instinctively duck out of the way and dive over the roof of my car, taking cover behind it. This isn't unusual: I'm parked within a 2 foot vicinity of a tree that my neighbor's planted back when the house next door was still occupied. It grows a lot of flowers and berries, so it's commonplace for bees to hover around the tree to harvest. This time was different, though. I peered over the hood of my car like a neurotic prairie dog, and I get a glimpse of this mother fucker: 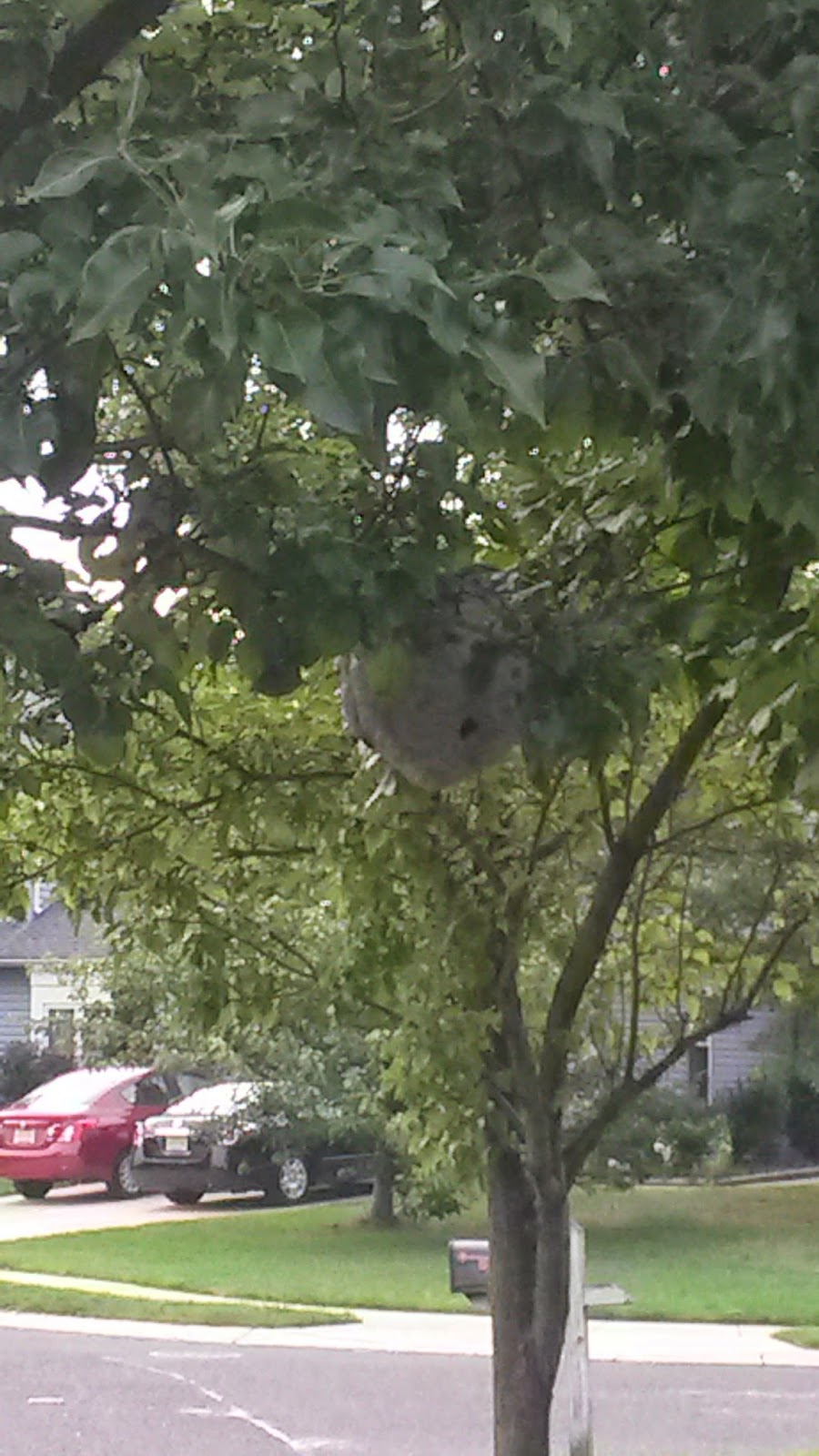 I know right? This thing was about the size of a basketball and highly active. It's about 7 feet above the ground, and lord knows I ain't cutting the branch on that thing. One of my biggest fears is of wasps, and this was just a giant bald faced hornet nest, so my "shit myself" levels were off the scale. Lately in New Jersey, at least as far as I've seen, our bees/wasps/hornets have been getting bigger and bigger each year. It's probably something in the water, since (as Lex put it) the Jersey shore  is particularly disgusting (as is the show), and it probably causes autism too (as does the show).

Anyway, so this isn't my first time dealing with wasp/hornet nests before. About a month ago my shed was plagued with three of them, although none were this big. Two were the size of golf balls and one was the size of a water bottle. I did the common sense thing to do: I went to Lowe's and bought a value pack of hornet killer. I sprayed both cans in the pack at the nests, and then inside the shed, and voila: the next day, everything was dead. Actually, at the time, I didn't even know the water-bottle sized nest was in the shed. It was blocked by one of my bikes and so I didn't see it, but I ended up killing them out anyway just from my spraying of the other two nests. Talk about luck, right? I was totally satisfied when I learned that I had another colony of confirmed kills.

This one is different, though. It's so big, and so batshit crazy, there was no way I was going to run the risk of spraying at it and pissing off its inhabitants. We called the township and asked them to take care of it, since it's not on our property and hangs over a public sidewalk, and they said they wouldn't because they only covered stray cats and dogs. My thoughts were this: fork over the money and hire an exterminator. The hive isn't on our property, it's on the property of an abandoned house that's seldom taken care of. Another person on the block called in and complained, sending them a picture of the nest, and they said they'd call the mortgage company of the house next door and have them take care of it, which would take up to ten days.

Here's the thing: last time I heard something like that is when we called the mortgage company and asked them to take care of the siding that was breaking off the house and at risk of flying into our windows. It's been months now, and we've had no response. So this "ten days" thing not only sounds like bullshit, but probably is. So, we decided we'd take matters into our own hands, although we probably shouldn't, since it's not our problem.

My dad suggested cutting the branch and leaving a trash can underneath it, but I was thinking of all the possible ways the trajectory of the slice in the branch could cause it to fall outside of the trash can and make our lives miserable. I wasn't about to let that happen. After a bit of musing over potential ideas, I got one:


Just to be clear, what I did was this: I cracked my window open a bit, covered the outside in plastic wrap, cut a hole in it, parked next to the hive, and then launched two cans of hornet killer at it from the hole. It was the best way to ensure that I didn't get stung, and that I could get the most accurate shot possible. I soaked it pretty well, as you can tell if you can hear the soaked pummeling of hornet killer flowing down from the hive. The instructions said wait 24 hours, and thus I did. I went back the next day.

The hive was still active.

Literally, it was maybe even more active than before. Aside from a few dead ones that were lying on the ground, it seemed like the spray had no effect. That scared me, but not to worry. I decided to buy another few cans of the spray, and over the course of the next few days, I kept soaking it up in hornet killer. By yesterday, it seemed that it was finally starting to work, but still, the hive was active.

I was at a loss. I didn't have any other ideas on how to kill a hornets' nest without getting stung, and I figured if a chemical that was specifically engineered to kill wasps/hornets/bees and their nests couldn't do the job, what was left besides to bash it with a baseball bat and knock it into the street, then run over it with a car repeatedly and wait for the swarm to calm down before coming anywhere near our block? Again, the idea of cutting the nest down occurred, but something just told me that these hornets were waiting for something. They were waiting in their hive for something genuinely dangerous to happen, and at that moment, they would strike. Having their nest cut down would very easily give them all access points to leave the hive and come attack us. I know that's what they were planning, but I wasn't about to give them that satisfaction. I texted my girlfriend with the following message:

"This damn nest has cost me $20 in spray and 4 hours of time. Only a dozen have died and the fortress still stands. Do you know what I call that?"

When she asked what, I responded again, but with a very telling picture of the supplies I would be using for my next attack:

That night (so they'd all be a little bit more sleepy), I sprayed the hive with two more cans of the spray, and then came back today to check up on my progress. There were maybe four or five of the little bastards still actively flying around the hive, and so I readied my weapons. That's right guys, I did what any patriot would do. This is America, dammit, there are thousands of men and women willing to die for this country, so hell if I'm gonna let a few buzzing bugs get the best of me. This is how we take care of a fucking hornets' nest in America.


Oh, and because it isn't visible in the video, the tips of the arrows had American flags hanging from them. No joke. Here is what the hive looks like now (flags slightly visible): 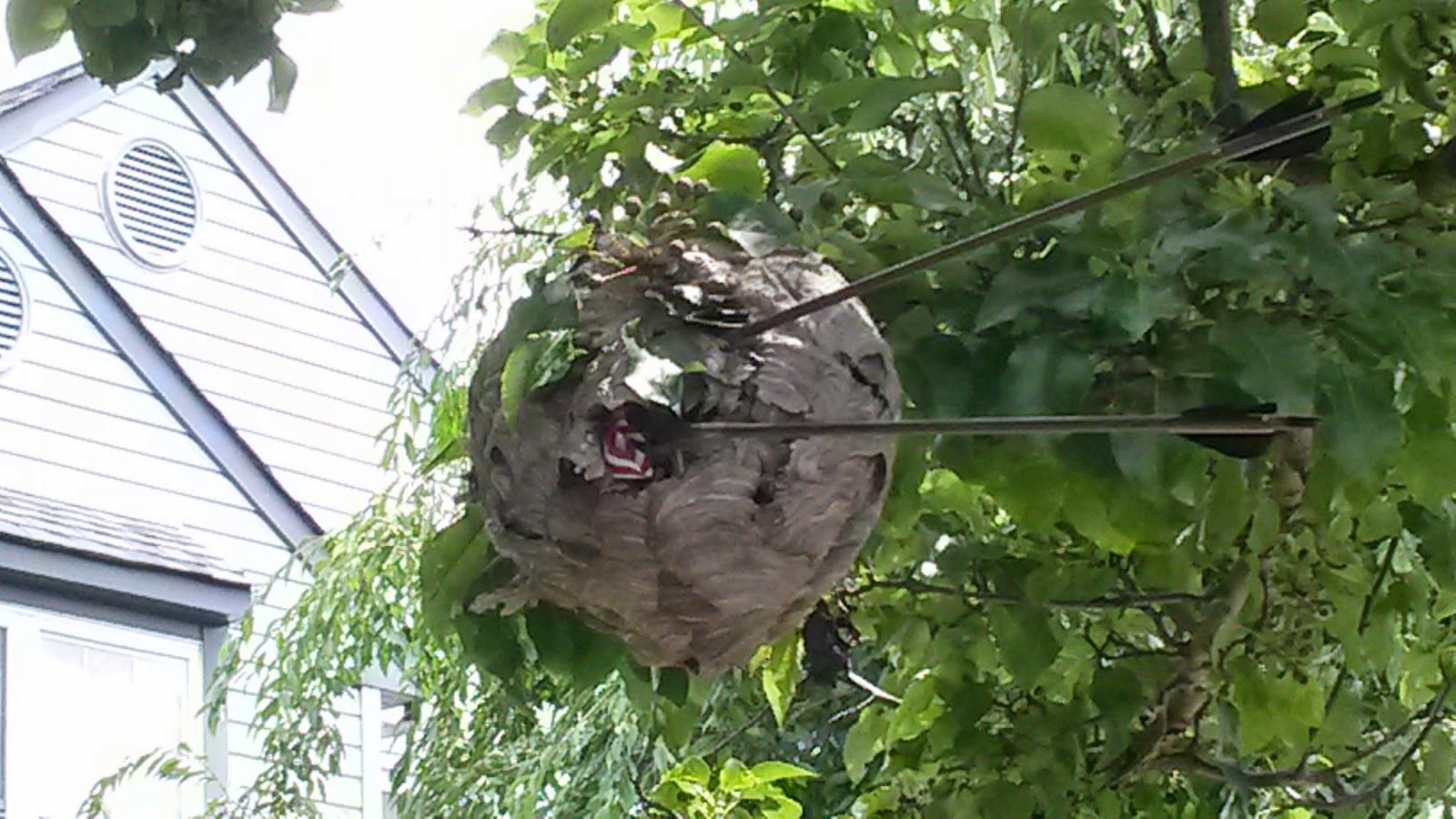 So what did that do? Hell if I know! There's a gaping hole in the side of the nest now, and that's good enough for me. I'm gonna end up buying more spray and making use of that gaping hole to get them more directly, but other than that, I think they got the message. Don't fuck with America. We know how to handle 'em.

Thank you to everyone for reading, and I'll see you all next time!
Posted by Gaston at 1:14 PM

Email ThisBlogThis!Share to TwitterShare to FacebookShare to Pinterest
Labels: Nick