Gamestop, Punch Out, and "Hot Deals"

I would've gotten to writing this sooner, but these past few days have been really hectic, including but not limited to getting sent to other dimensions, getting a car and going to IHOP. There was plenty of insanity beyond this, but if I had to chalk up the top 3 craziest things that happened in the past week, those would be my picks, in ascending order.

So about a week ago my brother and I are trailing around the middle of Scenic Nowhere, New Jersey (my home town) on a gaming raid. This happens every now and again, with great success: we do a drive by of every game store in a 10 mile radius of our house in an effort to find things we would really like to buy just so we can complain about how poor we are and how we can't afford them. It's actually one of the most productive parts of my monthly escapades because it reminds me to renew the superglue in the mouth of my wallet, since the flames of summer-after-semester-season remove it in less time than it takes to lick the glue off a postage stamp; a challenge, mind you, that I have been timing and testing for a longitudinal study of my own mental handicaps, which I have submitted to the Journal of Bumfuckology. Hopefully my paper will be published by September.

Back to the story, we're on this adventure because a few days before, my brother told me that there was a used copy of Punch-Out!! for $12 or $14 (he couldn't remember which) in the "HOT DEALS!" bin. This is big because usually they're $20 online, not including shipping, and my brother is a big fan of punching - that is, he's a fan of Punch-Out!! and boxing, making him a punching aficionado. At the same time, we were looking into splitting the cost of a $25 gift card for our cousin's birthday, so he asked if while I was out, I could pick up the copy if it were under $13, and then he would pay for the gift card on his own some other time. Fair trade. I get there, however, and see that it's $14, and so I didn't get it.

But that evening he decided he wanted to go get it anyway, and so we drove to Gamestop to pick it up. The game is still there, and it's $14, and so my brother takes out his wallet in preparation to go to the counter. I'm looking over at the Wii U games because I'm waiting for the day Nintendo 'gets good.' I'm inspecting the back of the case for ZombiU as I hear the faint voice of an inevitably pissed off grown-ass man who's probably already wrapping his knuckles and slipping the gloves on: "Wait a minute."

I walk over to see that he's pointing at another tag on the case, which says that the game is $30 used. His finger then trails to the sticker that had $14 on it and to its edge, where the wording is cut off halfway, but we can both very clearly read what it was supposed to say: 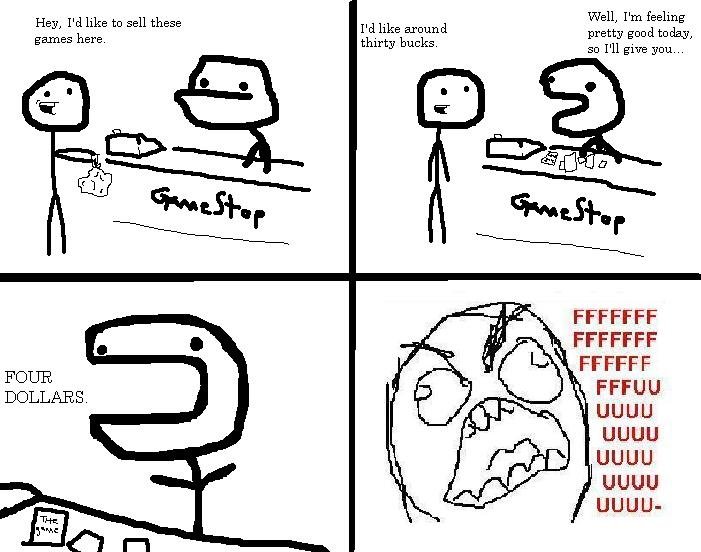 Bandit Video is a mom and pop shop that buys/sells/trades video games and movies. They're located literally right down the street from this Gamestop: probably a 5 minute walk away. It was clear, then, that somebody had bought a copy of Punch-Out!! from Bandit for $14, then sold it back to Gamestop for the $0.30 that Gamestop tickles your belly button with for used games, and then Gamestop put it back on the shelf without taking the sticker off. But it was still listed for $14, right? And it was even in the "HOT DEALS!" case, so we figured it would behoove us to ask the employee there how much it was being sold for.

"Oh, no, it's $30. That must have already been there. Some people like to print off stickers for yard sales and stuff and I guess whoever was handling the games forgot to take it off." Okay, so obviously this employee wasn't prepared to read the name on the sticker, so we did it for him. Hey, maybe he'd realize he's being an ass and sell it to us for the price it's listed for.

"Well no, it says Bandit Video on the sticker."

"Oh, well I guess that's what they were selling it for."

So this Gamestop decides they're not going to check their game cases for competitors' stickers before putting them on the shelf, and then they're going to mislead you by throwing the game in the "HOT DEALS!" case when, in fact, it's no more of a "HOT DEAL!" than if they put it in the regular used game pile. Not only that, but when a customer points out that the price is listed for cheaper than what they intended, Gamestop just ignores it. Not only that, but when we point out that it's their competitor's sticker, they just say "oh, well I guess that's what they were selling it for. Not us, though. We're charging double for it, despite having listed it differently (middle finger)."

Seriously? I'm unsure of how ballsy an employee has to be to not say to themselves "oh, this person saw an item in a discount bin for a discount price, but somebody forgot to take the discount sticker off and charge them the regular used game price. Maybe that was a bit misleading, and maybe it's on us to own up to that and give them that game for the listed price, then do a check of our other games."

I'm talking about two principles here. The first is that when an item is listed for a certain price, it seems like bullshit (at least to me) that the employee at the register can just say "oh, ignore that discount sticker. This is the actual price." The other is that the price they were actually selling it for wasn't a discount price, when it was labelled as though it should've been. It was the used price. Why was it in the "HOT DEALS!" bin, then, in the first place? If by "hot deal" they mean "I'm ramming a rip-off up your ass until your rectum turns hot, deal?" then I can understand that. On that note, I should repeat that it sells online for $20 used. So, yeah, quite the "hot deal," if they're talking about the scorching hole in your wallet.

Sure, sure, they're not obligated to sell the game for the misleading, false price, but it takes some pretty large cojones to sit there and flat out tell your customer: "we're selling it for $30. Our competitor sells it for half of that. Take it or leave it." It also takes some weird logic to sell an item labelled as a discount when it's... not discounted? What else could "HOT DEAL!" mean, besides this, or the aforementioned ass-ramming?

I've only ever encountered this situation twice before. One was at an Old Navy, where there was an outfit on the 75% off shelf, but it wasn't supposed to be there. The cashier, however, sold it for that discounted price because it was misleading for it to have been there in the first place, aside from the fact that it was an accident on the part of one of their employees (the employee even readily owned up to it, then went through the shelf to make sure they didn't do it for any other items as well).

The other situation was at a Walmart, where the employee accused my mother of intentionally putting a discount sticker on a non-discounted item and then lying about it. That was a battle to be put on video, but maybe that's a story for another day. Point being, even in this situation, it ended up being sold for the discount price.

We thought about saying something, and we ended up not doing so, but we definitely regretted it after. It was fine, though: I got back at them in another way the next day. I'll save that for mystery, though. After the ordeal, we went to Bandit, and my brother found another used boxing game for $14, and so he bought it.

So what's the take away here? Simple: Gamestop's filled with sleazy penny pinchers who aren't afraid to flat out tell you they're marking their price up 100% compared to their competitor right down the block, and aren't willing to own up to their mistakes in a way that might actually feel like you're not getting flipped off. That's really all there is to it.

Well, at least, that Gamestop is. But please, have you ever heard of Gamestop not being this way? If you have, please share. I'll move to your state.

On that note, if any of you reading this are in the area I'm talking about, I think you should go check out Bandit Video. They sell games for the NES, SNES, N64, PS1, etc. too, which is pretty awesome, and they give you some really good prices for the games/movies you want to sell to them. I've been going there for years now, and I can attest to their high quality and the friendly atmosphere. Here's their website:

And if you aren't in the area, consider looking into their selection on Amazon.

Thanks for reading, and I'll see you all next time!
Posted by Nick at 1:04 PM