It's no secret that when it comes to what the public thinks, atheists are usually at the bottom of the "nice" list. Back in 2006, associate professor Penny Edgell of the University of Minnesota conducted a poll that found that of all the listed minority groups (including immigrants, gays and lesbians, conservative Christians, Jews, Muslims, blacks, Hispanics, whites, and atheists), people were least likely to think they could share their visions of society with an atheist -- about 54% of respondents stating they thought they could. Professor Edgell was shocked by the results, stating: "We thought that in the wake of 9/11, people would target Muslims. Frankly, we expected atheists to be a throwaway group."

Keeping in mind this study was conducted only 2 years after 9/11, so her surprise is most likely well founded; however, this wasn't the first, nor the last of a long series of studies which show that the average American is not too fond of the atheist. In 2011, Gervais, et al. published a study, Do You Believe in Atheists? Distrust Is Central to Anti-Atheist Prejudice, in the Journal of Personality and Social Psychology. There were actually several studies within this one published article, but in one study specifically, the researchers asked 105 undergraduates at the University of British Columbia to read the following excerpt:


"Richard is 31 years old. On his way to work one day, he accidentally backed his car into a parked van. Because pedestrians were watching, he got out of his car. He pretended to write down his insurance information. He then tucked the blank note into the van’s window before getting back into his car and driving away.

Later the same day, Richard found a wallet on the sidewalk. Nobody was looking, so he took all of the money out of the wallet. He then threw the wallet in a trash can." 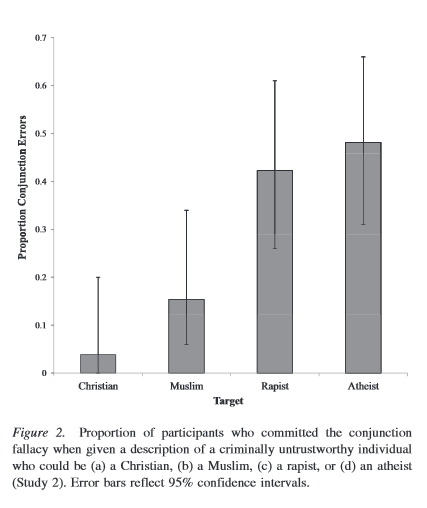 The results, however, showed that while only 4% and 15% committed the conjunction fallacy for Christians and Muslims respectively, 46% and 48% committed the fallacy for rapists and atheists respectively. That's right, people thought it was more likely that Richard was an atheist than he was a rapist. Well, actually, the two frequencies were not statistically significant from one another, so it was about the same for rapists and atheists. That makes it better, right?

So there's an obvious problem here. The public has a general distrust for atheists that can match, or possibly exceed, even that of rapists; and even in post 9/11 America (only 2 years after), atheists were still distrusted more than Muslims. It's obvious that the average person believes that the atheist is not as socially compatible as other minority groups, and is probably a lot more immoral.

Wait, what was that?

All the time I hear people claiming that atheists tend to be more immoral than "believers." This is, of course, completely outrageous on two accounts. Good old Hermant Mehta from Patheos emailed the Federal Bureau of Prisons to ask what the religious make up of the prison population was, and you can find the response here. To summarize, though, atheists make up 0.07% of the federal prison population that self-reported their religious affiliation in America. Of course, this data isn't perfect, but of what we have it's pretty impressive.

So that's one account: the statistics (of course, if you assume that breaking federal law is sinful). The other account I mentioned is on definition: What the heck does the statement even mean that atheists tend to be more immoral? By most Christian definitions, atheism itself is immoral, so no duh they're going to be "more immoral" than "believers." How are we defining morality here? This is such a problematic statement, and the framing is so biased, that it can't even be looked at in good health. Of course, by whatever group's morality you're making the judgment from, that group is going to almost always turn out more moral.

But... what if we based it on both groups' morality?

On September 12, 2014, Hofmann et al. published a study in Science entitled Morality in Everyday Life. The study repeatedly assessed moral/immoral actions in a sample of 1,252 people via self-reporting using ecological momentary analysis and found that religious and nonreligious people, as they see it, do not differ in terms of likelihood or quality of immoral/moral acts. Many have criticized these findings due to the use of self-reporting (even though they had a panel of independent judges draw conclusions as well), but that's the point. These experiences were based on the respondents' own definition of morality, and therefore isn't confounded by biased definitions. It means that in accordance with one's own principles, it seems to not be the case that the religious are more moral than the nonreligious.

As I said already, the framing of the question "are atheists more immoral than theists?" is already flawed and biased, but it helps to know that when you go by multiple lines of inquiry, you find this to not be the case, empirically or just pragmatically. Hopefully people can abandon their biases and begin to look at atheists in a more open way, because when it comes down to it (as Ricky Gervais said), if you kicked all the atheists and agnostics in America out, you'd lose 93% of The National Academy of Sciences, and less than 1% of the prison population.

How helpful would that be?