Global Warming Denial: A Face Against Facts and Consensus

I'm not a climatologist. I'm a woman on the verge of becoming a professional student with either too much or too little time on her hands. I do have an interest in science, however, and my university offers broad access to a very large number of scientific, peer-reviewed literature in numerous areas of study - this being one of them. So while I will not take the time here to explain exactly why the consensus believes global climate change is caused by human activity, I will explain that such a consensus exists, and that it is unequivocal given the enormous amount of evidence.

As an introduction, on their website for climatology, NASA released a graph highlighting, to our best knowledge, global temperature in degrees Celsius from 1880 to 2010. The data shows that the decade of 2000 to 2010 has been the warmest on record. Many in the opposition will refer to the outlier in 1998 which towers above the mean of the past decade (suggesting that the temperature has actually decreased), but outliers are outliers, and an exception does not disprove the general rule. The data for this graph was produced, as shown in the image, by four large international science institutions: the NASA Goddard Institute for Space Studies, the Met Office Hadley Centre, the NOAA National Climatic Data Center, and the Japanese Meteorological Agency. As you can see, the four agencies all produced similar estimates for annual temperature.

This is only the beginning of the consensus, however. The Intergovernmental Panel on Climate Change (IPCC) released their fifth assessment report in 2013 summarizing their findings. I encourage you to read this report, but to take a quote from it:


Multiple scientific surveys have been conducted as well to see the general stance of scientists, specifically climatologists, on global climate change. I will begin by explaining three studies cited by NASA's article entitled "Consensus: 97% of climate scientists agree."

The first study entitled "Expert credibility in climate change" was conducted by William Anderegg, James Prall, Jacob Harold and Stephen Schneider in 2010 on anthropogenic climate change (ACC), and was published in the Proceedings of the National Academy of Sciences. Anderegg et al. collected a list of 1,372 climate researchers "based on authorship of scientific assessment reports and membership on multisignatory statements about ACC" in order to consider only those defined to be "experts" in the field of climatology. After collecting this list, they examined each researcher and established that they must have a minimum of 20 publications on climate research in order to be considered a climate researcher. This narrowed down the selection to 908 researchers. It was found that varying the minimum publication cutoff would not materially alter the results. 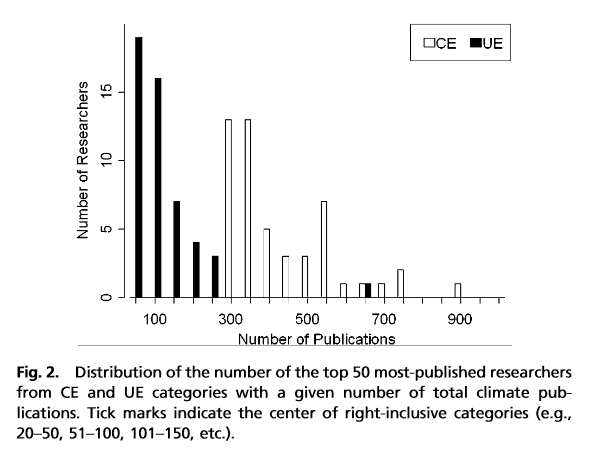 These 908 researchers were then ranked based on the number of their scholarly publications on climate research, and ordered accordingly. The list is said not to be representative of the entire scientific community, but as it draws from the most high-profile reports and public statements on ACC, it is representative of probably the strongest and most credentialed researchers in the field. The researchers in the list were classified as being either "convinced by the evidence" (CE) or "unconvinced by the evidence" (UE). The results show that the UE group comprise only 2% of the top 50 in the list, 3% of the top 100, and 2.5% of the top 200. This is consistent with the findings of other surveys which estimate the scientific consensus (as suggested by the aforementioned article by NASA) to be ~97%. Further analysis of the results shows, also, a large disparity between the expertise of the UE group and the CE group. Mean expertise of the UE group was nearly half of the mean expertise of the CE group (noted at 60 publications and 119 publications respectively). The medians were even further divided with the UE group at 34 publications and the CE group at 84 publications. The study conducts further analysis of this disparity as well.

The second study entitled "Examining the Scientific Consensus on Climate Change" was conducted by Peter Doran and Maggie Zimmerman in 2009, published in Eos. Here, Doran and Zimmerman asked a total of 10,257 "earth scientists" 2 questions, to which they received 3,146 responses. However, they make a distinction between "earth scientists" and climate scientists:

"In our survey, the most specialized and knowledgeable respondents (with regard to climate change) are those who listed climate science as their area of expertise and who also have published more than 50% of their recent peer-reviewed papers on the subject of climate change (79 individuals in total)."


So the most specialized respondents in climatology numbered to 79 in this survey. The questions were listed as 1) "When compared with pre-1800s levels, do you think that mean global temperatures have generally risen, fallen, or remained relatively constant?" and 2) "Do you think human activity is a significant contributing factor in changing mean global temperatures?" In other words, question 1 asks whether or not the respondent believes global temperature has risen, and question 2 asks if they believe human activity is responsible for that effect. Of the specialists who responded, 76 out of 79 of them (96.2%) responded to question 1 stating that they have risen, and 75 out of 77 of them (97.4%) answered "yes" to question 2. This is consistent, once again, with the consensus.

I will set aside a moment here to address a common response. A generically produced rebuttal to the study I just explained is that the study was web-based, and therefore "not a scientific survey." While it is true that it used an online database built from Keane and Martinez in 2007, which "lists all geosciences faculty at reporting academic institutions, along with researchers at state geologic surveys associated with local universities, and researchers at U.S. federal research facilities," this was for purposes of convenience and to receive the greatest number of responses. The fact that it was a web-based survey, however, does not mean the survey was not scientific. "Scientific survey" refers to how the survey was conducted, not what was used to conduct it. If the surveying follows the scientific method, it is a scientific survey. I'll make further comment on pedantic criticisms with the results of these surveys shortly.

The third and final study cited in the article was one entitled "Beyond the Ivory Tower: The Scientific Consensus on Climate Change," and was conducted by Naomi Oreskes in 2004. There has been criticism of the methodology of this study, but I will still explain it. The study examined 928 abstracts of papers published in scientific, peer-reviewed journals between the years of 1993 and 2003. Oreskes assigned six categories: explicit endorsement of the consensus position, evaluation of impacts, mitigation proposals, methods, paleoclimate analysis, and rejection of the consensus position. Of all the papers, 75% fell into the first three categories, while 25% fell into the categories of "methods" or "paleoclimate analysis." None of the papers rejected the consensus position. While some of the articles discussing methods or paleoclimate analysis could have taken the position that the climate change was a result of natural occurrences, not a single one of them made such a claim.

There were other surveys conducted as well, such as Lichter (2008), however the studies mentioned above are the strongest leading pieces of evidence to support the scientific consensus. I have received numerous small criticisms of how the studies were conducted, such as the comment of the second study being web-based, and the third study only observing abstracts. However, this is a common tactic I see in debates, and to respond to it, I like to refer to the word "substantiality." If I can produce study after study which all suggest the same conclusion - that around 97% of climatologists have accepted ACC - then you can nitpick at the studies all you wish. The evidence suggests that even with those minor flaws, the estimate is accurate. All that is confirmed by finding these minor flaws is this: nothing is perfect. 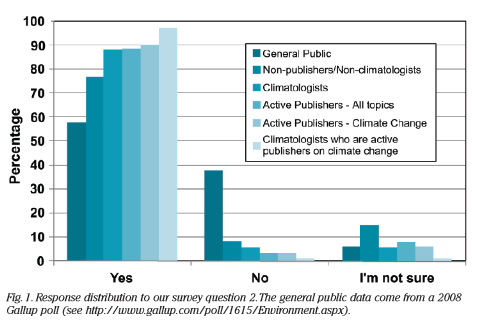 The superiority of these sources, as well, outweighs the fact that they have minor flaws. There are opposing citations of public opinion surveys, where results show a lower estimate of a consensus that global climate change is a result of human activity. However, these are public opinion surveys, and the majority (if not the totality) of all surveys of climatologists and experts in similar fields suggest the conclusions drawn from the studies explained above.

In addition, the California Governor's Office of Planning and Research compiled a list of 198 international scientific organizations which have all taken the stance that global climate change is caused by human action.

I believe, now, I have sufficiently made my point. The scientific consensus, beyond a reasonable doubt, is that global climate change is a result of human activity. No post, however, would be complete without a paragraph of application or significance.

There are hundreds, even thousands of fields of research and study which cover different topics. Some of these overlap, but it is generally safe to say that most of us - the uninformed public, or members of other fields - are not experienced enough in climatology, or in science in general, to make judgments of global climate change on our own merit. We have educational systems which allow for people to specialize in these fields, so that we have experts to trust when looking for answers in matters that go beyond our comprehension. When there is clearly a consensus among these experts, it is obligatory of us to accept the consensus and do what we can to stop aiding the issue and help to diminish the growing temperature in Earth's climate system. To ignore this consensus and insist that they're wrong is to ignore the requisite of substantiality, or to suggest that our insistence alone is superior to the word of those who are trained and qualified in climatology. If such narcissism outweighs the risk of contributing to further toxicity in our climate, then I fear we have lost all hope.

Thank you for reading.

[EDIT: (12/9/14) The statement by the AMA is no longer online from what I can see. Instead, I have linked to an article which discusses recent research published in JAMA, which should suffice for now.]